Discover the Transformative Power of Yoga at Yoga Den Bayard Tina Knight and Andrew Jones, co-owners of Yoga Den Bayard, never cease to be amazed at the transformative power of yoga they’ve witnessed, both personally and in the lives of their yoga community, over the past 15 months.
Knight, who first began practicing yoga in 2003, became a yoga teacher in 2013, and eventually taught classes at the Southside and Mandarin Yoga Den locations. In 2017, Knight’s life began guiding her in other directions, so she took a break from yoga instruction—but that didn’t last long. When an opportunity arose in early 2020 to purchase the Yoga Den Bayard studio, Knight felt a divine nudge to hop back onto the mat—this time as a studio owner.
While Jones wasn’t a yoga aficionado at the time, he wholeheartedly supported Knight in pursuing her dreams. “Interestingly, six weeks after we took ownership of the studio, the pandemic hit so we had to close our doors,” recalls this former Marine, whose strong ability to adapt and thrive became an invaluable resource. “We began offering all the classes online, and with my technical background, I was able to help facilitate that,” he says.
To ensure classes ran smoothly, Jones monitored many of them live. “Since I was watching them anyway, I figured I might as well join in,” shares this devoted yogi. “At first, it was really challenging. I was dealing with chronic back pain and couldn’t even touch my shins in a forward fold.” But as the weeks and months progressed, Jones not only noticed an improvement in his yoga practice, but his entire life. “Overall, I feel mentally calmer, I sleep better, I’m physically healthier, and no longer suffer with the back pain. I really learned to read my body more. The studio was Tina's dream, but I ended up taking it over,” he laughs.
Knight couldn’t be more thrilled that Jones’ introduction to yoga has been such a profound experience. “He was so inspired that he, too, became a yoga instructor,” says this passionate yogini, who loves that the studio has become such an integral part of both of their lives.
While opening a new business during a global pandemic has had its challenges, the pair shares that it has also had an abundance of blessings. “For instance, when we had to shut down, we were able to take our time with the remodel and do it ourselves,” says Jones, noting how much he appreciates the natural, Earth-inspired atmosphere they’ve created inside the space.
“It’s been quite an adventure, but we’ve always had just enough of the good stuff to keep us pushing through,” asserts Knight. “Instead of worrying about the future, we stay in the present and work on adapting to whatever comes our way.” Jones agrees. “We constantly get the opportunity to take the same lessons we teach in our classes and apply them in our own lives.”
And speaking of the good stuff, this dynamic duo agrees that their yoga community is nothing short of amazing. “Our teachers are outstanding. The students all support one another. We really couldn’t be more pleased with our tribe. It feels like a very sacred container we’ve created,” affirms Knight.
“I’m so glad Tina had the original vision. We want to help as many people as possible—including veterans and active-duty military personnel,” shares Jones. 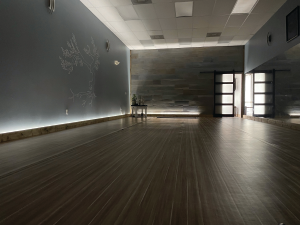 “We all follow the Yoga Den philosophy of no judgement or expectations. This ensures that our studio truly is a welcoming environment for anyone seeking the wide variety of benefits that a regular yoga practice can offer,” says Knight. “Just showing up to your mat is the hardest part sometimes. But once you’re there, the magic happens. We all settle into the space and tap into the energy of the room,” she explains. “As a teacher, my favorite moment is when we move into savasana; when everyone has surrendered and allowed themselves to just let go.”

Jones agrees that showing up can often be the hardest part. “Being a teacher helps keep me energized and committed to the practice—especially on the days when showing up can be a challenge,” he says. “Yoga can play such an integral part of any self-care regimen. Our society doesn’t place enough of an emphasis on self-care. It’s so important to make time to take care of ourselves. I invite anyone curious about the transformative effects of a yoga practice to come check us out.”